Answer: (a) near the Equator

(iii) The direction of wind around a low pressure in northern hemisphere is:

(b) perpendicular to isobars

(iv) Which one of the following is the source region for the formation of air masses?

(a) the Equatorial forest

2. Answer the following questions in about 30 words.

(i) What is the unit used in measuring pressure? Why is the pressure measured at station level reduced to the sea level in preparation of weather maps?

(ii) While the pressure gradient force is from north to south, i.e. from the subtropical high pressure to the equator in the northern hemisphere, why are the winds north easterlies in the tropics.

(iii) What are the geotrophic winds?

Answer: The geostrophic wind is the theoretical wind that would result from an exact balance between the Coriolis Effect and the Pressure Gradient Force.

Answer: During the day, the land heats up faster and becomes warmer than the sea. Thus, pressure gradient from sea to land is created and the wind blows from the sea to the land as the sea breeze. In the night, the reversal of condition takes place. The land loses heat faster and is cooler than the sea. The pressure gradient is from the land to the sea and hence land breeze results.

(i) Discuss the factors affecting the speed and direction of wind.

Answer: The air in motion is called wind. The wind blows form high pressure to low pressure. However, direction and speed of wind are controlled by a combination of following factors:

Pressure Gradient Force: Differences in horizontal distribution of atmospheric pressure drives the winds from areas of high pressure to areas of low pressure. The greater the pressure gradient and its force, higher will be the wind speed.

Coriolis Effect: The rotation of the earth on its axis affects the directions of the winds. Under the influence of Coriolis force, winds get deflected to their right in northern hemisphere and to their left in the southern hemisphere.

Frictional Forces: It affects the speed of wind. Over the sea surface, the friction is minimal. Land features like mountains, plateaus and valleys bring about a change in the speed and direction of the winds.

(ii) Draw a simplified diagram to show the general circulation of the atmosphere over the globe. What are the possible reasons for the formation of subtropical high-pressure over 30° N and S latitudes? 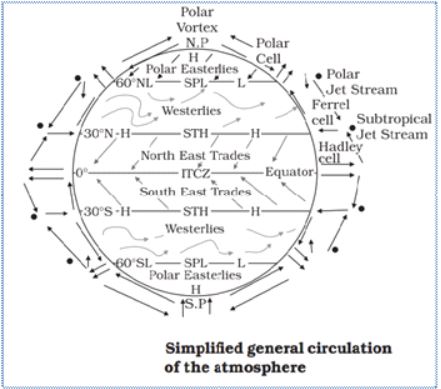 Reasons for formation of subtropical high pressure over 30°N and S latitudes: The warm air of the equatorial belt gradually cools down, when it goes up and turns towards the north and south in the northern and southern hemisphere respectively due to rotation of the earth. It reaches the top of the troposphere up to an altitude of 14 km and moves towards the poles. This causes accumulation of air at about 30° north and south part of this air sinks at ground and form subtropical high. Thus, descend of cold air causes high-pressure. Large air masses drift from the polar areas to the sub-tropics due to earth's rotation and causes high pressure there.

Answer: Tropical cyclones are violent storms that originate over oceans in tropical areas and move over to the coastal areas bringing about large-scale destruction caused by violent winds, very heavy rainfall, and storm surges.

Presence of the Coriolis force

Around the eye is the eye wall, where there is a strong spiralling ascent of air to greater height reaching the tropopause. The wind reaches maximum velocity in this region, reaching as high as 250 km per hour. Torrential rain occurs here. From the eye wall, rain bands may radiate and trains of cumulus and cumulonimbus clouds may drift into the outer region. The cyclone creates storm surges and they inundate the coastal low lands. The storm peters out of the land.