Science
Download PDF
Read and download free pdf of CBSE Class 9 Science Structure Of Atom Worksheet. Students and teachers of Class 9 Science can get free printable Worksheets for Class 9 Science in PDF format prepared as per the latest syllabus and examination pattern in your schools. Standard 9 students should practice questions and answers given here for Science in Grade 9 which will help them to improve your knowledge of all important chapters and its topics. Students should also download free pdf of Class 9 Science Worksheets prepared by school teachers as per the latest NCERT, CBSE, KVS books and syllabus issued this academic year and solve important problems provided here with solutions on daily basis to get more score in school exams and tests

Class 9 Science students should refer to the following printable worksheet in Pdf for Structure Of Atom in standard 9. This test paper with questions and answers for Grade 9 Science will be very useful for exams and help you to score good marks

Question. What was Chadwick’s experiment?
Ans : In Chadwick’s experiment, he bombarded beryllium atoms with high speed particles.
(i) The rays emitted from beryllium during bombardment had speeded about one-tenth the speed of light.
(ii) Later Chadwick was able to show that these rays consisted of neutral particles called neutron.

Question. Define the term “Half life”.
Ans :
Radioactive elements are unstable and disintegrate with time emitting alpha and beta particles along with gamma rays. The rate of disintegration depends on the amount of substance. As the amount of the substance decreases, disintegration becomes slower. But it takes a long time for whole of the substance to decay. Thus, the rate of radioactive decay is measured
in terms of half time. The time taken by half of the atoms of radioactive element to disintegrate is called its half-time.

Question. What is the charge and mass of a -particles?
Ans : Charge is 2 and mass is 4 amu.

Question. What is the charge and mass of alpha particle?
Ans : Charge = + 2 units
Mass = 4 units

Question. Explain Rutherford’s atomic model.
Ans : Rutherford purposed a model of an atom on the basis of a-particles scattering experiment. This is known as Rutherford’s nuclear model of atom.
(i) An atom consist, a heavy positively charged core called nucleus.
(ii) Nucleus is surrounded by electrons.
(iii) Electrons and nucleus are held together by electrostatic force of attraction.
(iv) Size of nucleus is very small as compared to the size of atom.
(v) Almost the entire mass of the atom is concentrated in the nucleus.

Question. Electron attributes negative charge, protons attribute positive charge. An atom has both but why there is no charge?
Ans : The negative and positive charges of electrons and protons respectively are equal in magnitude. So, the atom as a whole is electrically neutral.

Question. Write the charge and mass of an electron.
Ans : Its mass is 2000 1 times that of proton and it is negatively charged.

Question. What are nucleons?
Ans : Protons and neutrons reside in the nucleus of an atom and are thus called nucleons.

Question. What is an orbit?
Ans : Orbit is the path of electron around the nucleus.

Question. (i) An ion X2+ contains 10 electrons and 12 neutrons. What is the atomic number and mass number of the element X?
(ii) Is it possible in an atom to have 12 protons and 13 electrons?
(iii) Why helium gas is inert?
Ans : (i) Atomic number = 12, Mass number = 24.
(ii) No, it is not possible. An atom is electrically neutral. The number of positively charged particles (protons) is always equal to the number of negatively charged particles (electrons).
(iii) Helium atom has completely filled outermost shell. Thus, it is inert.

Question. What were the drawbacks of Rutherford’s model of an atom?
Ans : The orbital revolution of the electron is not expected to be stable. Any particle in a circular orbit would undergo acceleration and the charged particles would radiate energy. Thus, the revolving electron would lose energy and finally fall into the nucleus. If this were so,
the atom should be highly unstable and hence matter would not exist in the form that we know.

8. Isotopes: These are the atoms of the same element having the same atomicnumber but different mass number.e g 1H1,1H2,1H3

9. Isobars: Isobars are the atoms of different elements having the same massnumber but different atomic number.

10. Isoelectronic species: These are those species which have the same numberof electrons.

11. Electromagnetic spectrum:-It is a continuous spectrum. It consists of a range of electromagnetic radiations arranged in the order of increasing wavelengths or decreasing frequencies.

12. Spectroscopy:-The study of emission or absorption spectra is referred as spectroscopy.

14. o Absorption spectrum : The spectrum obtained when radiation is passed through a sample of material. The sample absorbs radiation of certain wavelengths. The wavelengths which are absorbed are missing and come as dark lines.

a. An electron in the hydrogen atom can move around the nucleus in a circular path of fixed radius and energy. These paths are called orbits orenergy levels. These orbits are arranged concentrically around the nucleus.

b. As long as an electron remains in a particular orbit, it does not lose or gain energy and its energy remains constant.

c. When transition occurs between two stationary states that differ in energy, the frequency of the radiation absorbed or emitted can be calculated

d. An electron can move only in those orbits for which its angular momentum is an integral multiple of h/2π The radius of the nth orbit is given by rn =52.9 pm x n2 /Z energy of electron in nth orbit is ; 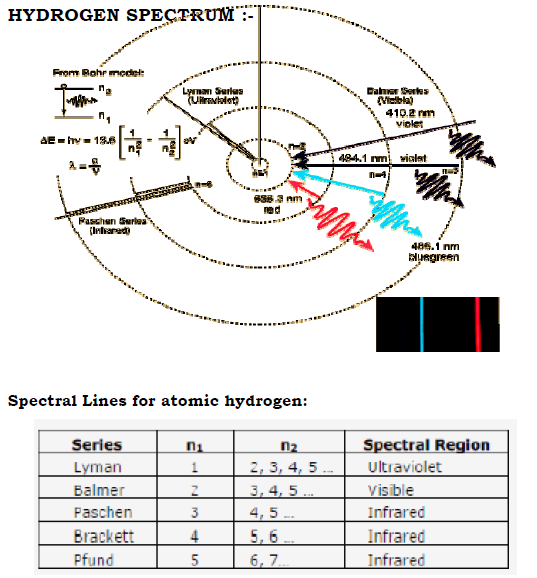 16. Black body: An ideal body, which emits and absorbs all frequencies, is called a black body. The radiation emitted by such a body is called black body radiation. 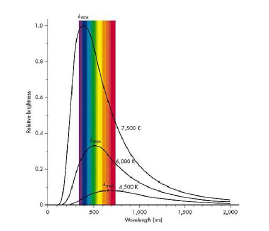 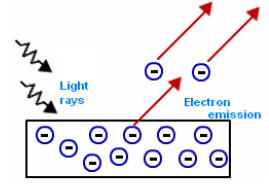 19. Heisenberg uncertainty principle: It is impossible to determine simultaneously the exact position and exact momentum of an electron. Mathematically, ∆x x ∆p ≥ h/ 4 π\

20 .Quantum number’s: These are the numbers obtained by solution of Schrodinger equation used to define the energy of electron its position, orientation and spinning.

21. There are four quantum numbers namely principal, azimuthal, magnetic and spin quantum no.

24. Aufbau principle: electron filled in various subshell in increasing order of their energies.

25. Pauli’s exclusion principle: No two electrons in an atom can have same set of four quantum numbers.

26. Hunds rule of maximum multiplicity: Paring of electrons in the orbitals belonging to the same sub-shell does not take place until each orbital belonging to that sub-shell has got one electron each.

Stability of completely filled and half filled subshells: 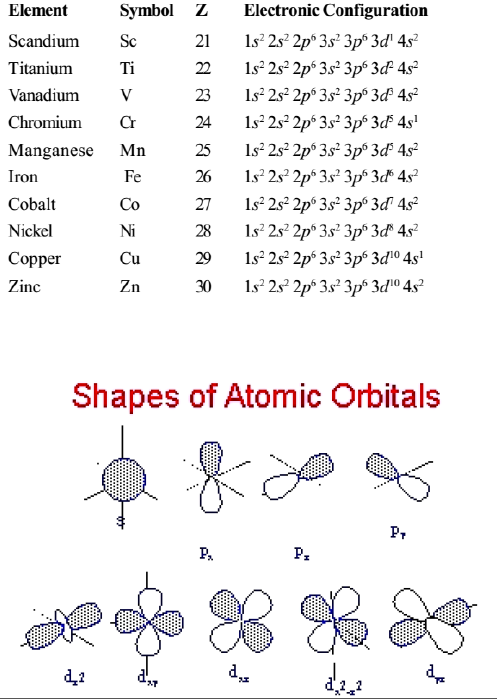