Science
Download PDF
Read and download free pdf of CBSE Class 9 Science Matter Around Us Worksheet. Students and teachers of Class 9 Science can get free printable Worksheets for Class 9 Science in PDF format prepared as per the latest syllabus and examination pattern in your schools. Standard 9 students should practice questions and answers given here for Science in Grade 9 which will help them to improve your knowledge of all important chapters and its topics. Students should also download free pdf of Class 9 Science Worksheets prepared by school teachers as per the latest NCERT, CBSE, KVS books and syllabus issued this academic year and solve important problems provided here with solutions on daily basis to get more score in school exams and tests

Class 9 Science students should refer to the following printable worksheet in Pdf for Matter Around Us in standard 9. This test paper with questions and answers for Grade 9 Science will be very useful for exams and help you to score good marks

Class 9 Science Worksheet for Matter Around Us

CBSE Class 9 Science Worksheet - Matter around Us. Students can download these worksheets and practice them. This will help them to get better marks in examinations. Also refer to other worksheets for the same chapter and other subjects too. Use them for better understanding of the subjects. 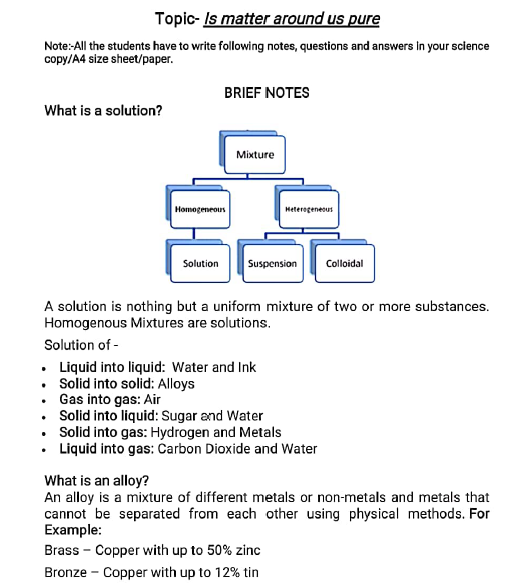 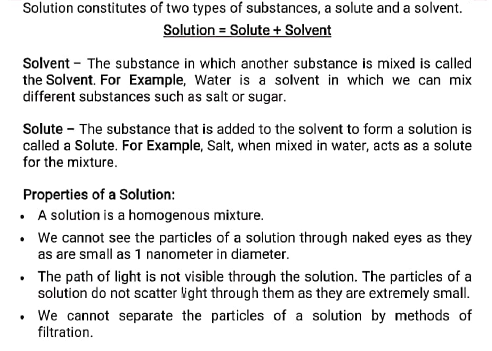 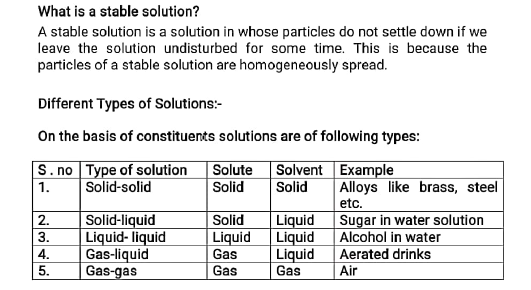 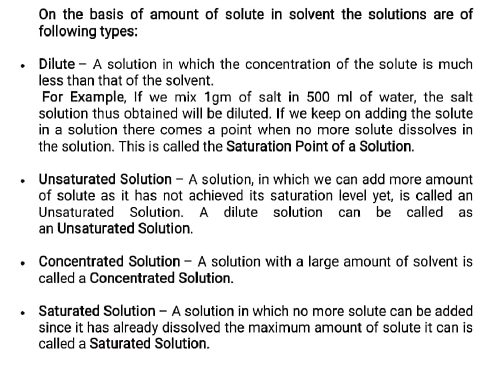 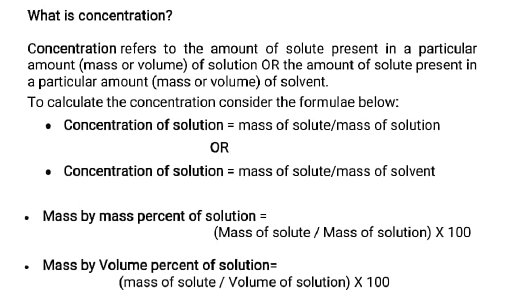 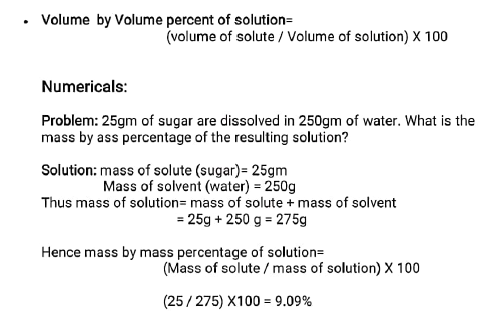 1.How can we separate a mixture of two miscible liquids ?

2.What separation technique will you apply for separation of the following ?

(ii)Different pigments from the extract of flower petals.

3.How do we test purity of substances?

4.Name the process to separate the particles of colloid.

5.What is meant by fractionating column?

7.Suggest any one method by which we can increase the solubility of saturated solutions.

1.State two reasons to justify that air is a mixture and water is compound.

2.Distinguish between homogeneous and heterogeneous mixture.

4.A solution of acetone contains 30 ml of acetone in 570 ml of water.
Calculate the percentage concentrationof the solute in the solution.

6.Identify the physical and chemical changes from the following
(i)Burning of magnesium in air
(ii)Electrolysis of water
(iii)Tarnishing of silver spoon
(iv)Sublimation of iodine

7.Fine beam of light entering through a small hole in a dark room,illuminates the particles in its path.Name the process associated and Explain.

9. a) 110 g of salt is present in 550g of solution. Calculate the concentration of solution.

b) 10 ml of H2SO4 is dissolved in 90 ml of H2O. Calculate the concentration of solution.

10.State the condition for using the method of centrifugation to separate contents of a mixture.State the principle involved in this process.

11.Enumerate any two differences between simple distillation and fractionational distillation.

12.Few iron filings and a pinch of sulphur powder are taken in a china dish and mixed properly. Justify the change, giving two points as physical/chemical change.

13.a) What is solute and solvent in aerated drinks?

b) Given a solution of substance 'A' how will you test whether it is saturated or unsaturated with respect to 'A' at the given temperature.

1.Draw a neat labeled diagram of the apparatus used for separating acetone and water (forming a miscible mixture) from their mixture.

2.Two miscible liquids A and B are present in a solution. The boiling point of A is 60° C while that of

B is 98° C. Suggest a method to separate the components of mixture. Why are they separated by this process ?

3.Which technique, crystallization or evaporation is better to obtain salt from sea water?

4.Name the technique used for separation of those solutes that dissolve in the same solvent and give any two applications of this technique.

5.What separation technique will you apply for the separation of the following?

a) Sodium chloride from its solution b) Tea leaves from tea

6. Describe the method used for separating the components of blood. List its any two applications.

7.Write any three differences between a compound and a mixture.

8.Classify the following into physical or chemical change :
(i) burning of a candle
(iv) fading of clothes
(ii) Tarnishing of silver spoon
(v) mixing of iron filings and sand
(iii) Sublimation of iodine
(vi) Electrolysis of water

9.Distinguish between elements and compounds with one example of each.

10.Elements are classified as metals, non-metals and metalloids. Give any one property of each. Also give one example of each.

12. How will you obtain blue dye from blue ink experimentally? How is this technique different from distillation?

Arushi's mother always squeezes water from wet clothes in the spinner of washing machine and then uses it to clean the floor. (CBSE 2013)

a) Write the principle of the technique used in the above mentioned process.

b) Write one more application of this technique.

c) What do you learn from Arushi's mother?