Science
Download PDF
Read and download free pdf of CBSE Class 9 Physics Revision Worksheet Set A. Students and teachers of Class 9 Physics can get free printable Worksheets for Class 9 Physics in PDF format prepared as per the latest syllabus and examination pattern in your schools. Standard 9 students should practice questions and answers given here for Physics in Grade 9 which will help them to improve your knowledge of all important chapters and its topics. Students should also download free pdf of Class 9 Physics Worksheets prepared by school teachers as per the latest NCERT, CBSE, KVS books and syllabus issued this academic year and solve important problems provided here with solutions on daily basis to get more score in school exams and tests

Class 9 Physics students should refer to the following printable worksheet in Pdf in standard 9. This test paper with questions and answers for Grade 9 Physics will be very useful for exams and help you to score good marks

• i) Amplitude- The amplitude of sound wave is the height of the crest or tough. The amplitude is how high the crests are. In a sound wave, the maximum displacement associated with the particle constituting a wave is called its amplitude. It is represented by “A’. SI unit is metre.

Amplitude depends upon the force with which an object vibrates . E.g., When we hit a table hard, a loud sound is produced due to its larger amplitude.
Similarly, if we hit the table slowly, the sound produced is low as its amplitude is small. Thus, loudness as well as soft sound is determined by its amplitude.

• iii) Frequency- The number of vibrations completed by a particle in one second is the frequency of the sound wave.
Frequency = Number of Oscillations / Total Time. =1/T

We can calculate the frequency of sound by calculating the number of compressions or rarefaction in one second. It is represented by a Greek letter (Greek letter nu). SI unit is Hertz. SI unit of frequency is named after Heinrich Rudolph Hertz who laid foundation 4 future development of radio, telephone, telegraph and TV.

• iv) Time period- The time taken by the particle of the medium for completing one oscillation/vibration is called the time period. It is represented by the symbol “T”. SI unit is second. Time period of a sound wave is the time between 2 successive compressions or 2 successive rarefactions

v) Velocity of sound wave- It is the distance travelled by a wave in one second. Speed is represented by V. Speed with which compression and rarefactions move ahead is called velocity. SI unit is meter per second (m/s).

The speed of sound is more in solids, less in liquids and least in gases 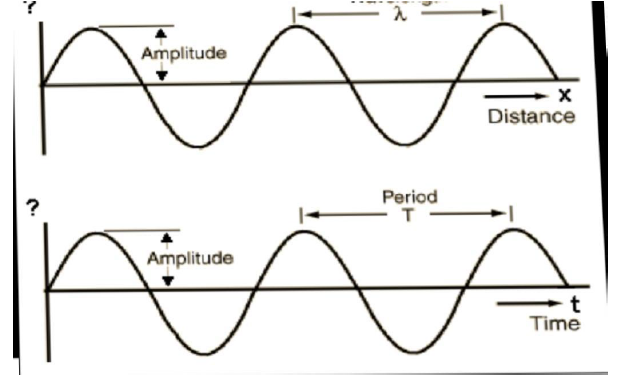 RELATIONSHIP BETWEEN SPEED V, FREQUENCY AND WAVELENGTH OF SOUND

The velocity of sound remains almost same for all frequencies in a given medium under the same physical conditions.

Questions based on above topics:

Question. What is the formula of time period?
Solution: T= 1/f. Here f stands for frequency.

Question. Does amplitude decrease with distance?
Solution: The energy spreads out in a spherical shell, the energy density decreases as the square of the distance from the source. That's your amplitude decrease. However, the frequency and wavelength stay the same as long as it keeps traveling at the speed of light.

Question. How are the wavelength and frequency of a sound wave related to its speed?
Solution: Wavelength, speed, and frequency are related in the following way:
Speed = Wavelength x Frequency
v ( speed) = λ × f

Question. Calculate the wavelength of a wave whose frequency is 220hz and speed is 440m/sec in medium?
Solution: frequency=velocity/wavelength
So, 220=440/wavelength
wavelength =2m.