Science
Download PDF
Read and download free pdf of CBSE Class 9 Physics Motion Worksheet Set B. Students and teachers of Class 9 Physics can get free printable Worksheets for Class 9 Physics in PDF format prepared as per the latest syllabus and examination pattern in your schools. Standard 9 students should practice questions and answers given here for Physics in Grade 9 which will help them to improve your knowledge of all important chapters and its topics. Students should also download free pdf of Class 9 Physics Worksheets prepared by school teachers as per the latest NCERT, CBSE, KVS books and syllabus issued this academic year and solve important problems provided here with solutions on daily basis to get more score in school exams and tests

Class 9 Physics students should refer to the following printable worksheet in Pdf for Motion in standard 9. This test paper with questions and answers for Grade 9 Physics will be very useful for exams and help you to score good marks

4. A motorboat starting from rest on a lake accelerates in a straight line at a constant rate of 3.0 m s–2 for 8.0 s. How far does the boat travel during this time?
Solution.
Given, initial velocity of the boat = 0 m/s
Acceleration of the boat = 3 ms-2
Time period = 8s
As per the second motion equation,
Therefore, total distance travelled by the boat in 8 seconds =
= 96 meters
Therefore, the motorboat travels a distance of 96 meters in a time frame of 8 seconds.

5. A driver of a car travelling at 52 km h–1 applies the brakes and accelerates uniformly in the opposite direction. The car stops in 5 s. Another driver going at 3 km h–1 in another car applies his brakes slowly and stops in 10 s. On the same graph paper, plot the speed versus time graphs for the two cars. Which of the two cars travelled farther after the brakes were applied?
Solution.
The speed v/s time graphs for the two cars can be plotted as follows. 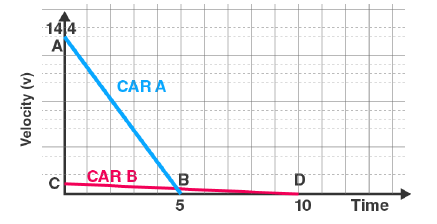 6. Fig 8.11 shows the distance-time graph of three objects A,B and C. Study the graph and answer the following questions: 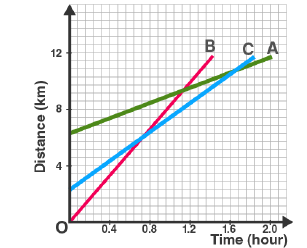 (a) Which of the three is travelling the fastest? (b) Are all three ever at the same point on the road? (c) How far has C travelled when B passes A? (d) How far has B travelled by the time it passes C?
Solution.
(a) since the slope of line B is the greatest, B is traveling at the fastest speed.
(b) since the three lines do not intersect at a single point, the three objects never meet at the same point on the road.
(c) since there are 7 unit areas of the graph between 0 and 4 on the Y axis, 1 graph unit equals 4/7 km.
Since the initial point of object C is 4 graph units away from the origin, Its initial distance from the origin is 4*(4/7)km = 16/7 km
When A passes B, the distance between the origin and C is 8km
Therefore, total distance travelled by C in this time = 8 – (16/7) km = 5.71 km
(d) the distance that object B has covered at the point where it passes C is equal to 9 graph units.
Therefore, total distance travelled by B when it crosses C = 9*(4/7) = 5.14 km

7. A ball is gently dropped from a height of 20 m. If its velocity increases uniformly at the rate of 10 m s-2, with what velocity will it strike the ground? After what time will it strike the ground?
Solution.
Given, initial velocity of the ball (u) = 0 (since it began at the rest position)
Distance travelled by the ball
As per the third motion equation,
Therefore,
= 2*(10ms-2)*(20m) + 0
v2 = 400m2s-2
Therefore, v= 20ms-1
The ball hits the ground with a velocity of 20 meters per second.
As per the first motion equation,
Therefore,
=
= 2 seconds
Therefore, the ball reaches the ground after 2 seconds. 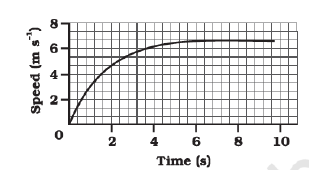 (a) Find how far does the car travel in the first 4 seconds. Shade the area on the graph that represents the distance travelled by the car during the period.
(b) Which part of the graph represents uniform motion of the car?
Solution.
(a) 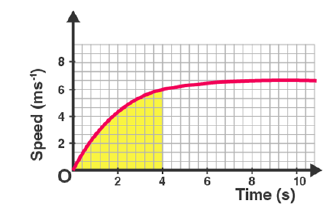 The shaded area represents the displacement of the car over a time period of 4 seconds. It can be calculated as:
(1/2)*4*6 = 12 meters. Therefore the car travels a total of 12 meters in the first four seconds.
(b) Since the speed of the car does not change from the points (x=6) and (x=10), the car is said to be in uniform motion from the 6th to the 10th second.

1. What is meant by the statement ‘Rest and motion are relative terms’? Give example to show it.
2. Explain whether the walls of a classroom are at rest or in motion.
3. Define scalar and vector quantities.
4. Identify the following as scalar or vector quantities:- mass, velocity, speed, length, distance, displacement, temperature, force, weight, power, work and energy.
5. The school of a boy from his home is 1 km to the east. When he reaches back home, he says that he had traveled 2 km distance but his displacement is zero. Justify your answer.
6. Under what condition, the average speed is equal to the magnitude of the average velocity.
7. Can the average speed of a moving body be zero?
8. Can the average velocity of a moving body be zero? State eamples.
9. A car covers a distance of 5 km in 20 mins. Find the velocity of the car in (a) km/min (b)m/s (c) m/min (d) km/hr.
10. a train is moving with a velocity of 45km/hr. calculate the distance traveled by it in 1 hr, 1 min, 1 second.
11. An object P is moving with a constant velocity for 5 mins. Another object Q is moving with changing velocity for 5 mins. Out of these two objects, which one has acceleration? Explain.
12. Can an object be accelerated if it is moving with constant speed? If yes, explain giving examples.
13. (i) When do you say that an object has positive acceleration?
(ii) When do you say that an object has negative acceleration?
14. State which of the following situations are possible and give an example of each of these:-
(a) a body moving with constant acceleration but with zero velocity.
(b) A body moving horizontally with acceleration in vertical direction.
(c) A body moving with a constant speed in an accelerated motion.
15. What is a reference point?
16. Name the 2 physical quantities which can be obtained from velocity-time graph.
17. An electric train is moving with a velocity of 120km/hr. how much distance will it cover in 30 sec?
18. Give differences between linear motion and circular motion.