Science
Download PDF
Read and download free pdf of CBSE Class 9 Physics Force And Laws Of Motion Worksheet Set D. Students and teachers of Class 9 Physics can get free printable Worksheets for Class 9 Physics in PDF format prepared as per the latest syllabus and examination pattern in your schools. Standard 9 students should practice questions and answers given here for Physics in Grade 9 which will help them to improve your knowledge of all important chapters and its topics. Students should also download free pdf of Class 9 Physics Worksheets prepared by school teachers as per the latest NCERT, CBSE, KVS books and syllabus issued this academic year and solve important problems provided here with solutions on daily basis to get more score in school exams and tests

Class 9 Physics students should refer to the following printable worksheet in Pdf for Force And Laws Of Motion in standard 9. This test paper with questions and answers for Grade 9 Physics will be very useful for exams and help you to score good marks

Class 9 Physics Worksheet for Force And Laws Of Motion

Question. Explain our walking in terms of Newton’s third law of motion.
Answer. When we walk on ground, our foot pushes the ground backward and in return the ground pushes our foot forward. The forward reaction exerted by the ground on our foot makes us walk forward.


Question. State Newton’s three laws of motion.
Answer. Sir Isssac Newton further studied the idea of Galileo’s on force and motion and presented three laws of motion. These laws are as follows :
(i) First Law : A body remains in resting position unless it is not introduced with an unbalanced external force.
(ii) Second Law : The rate of change of momentum of a body is directly proportional to the applied unbalanced force and change takes place in the direction of the force.
(iii) Third law : Action and reaction are equal and opposite and they act on different bodies.

Question. What is frictional force?
Answer. The force that always opposes the motion of object is called force of friction.


Question. What is inertia?
Answer.The natural tendency of an object to resist a change in their state of rest or of uniform motion is called inertia.


Question. State Newton’s first law of motion.
Answer. An object remains in a state of rest or of uniform motion in a straight line unless acted upon by an external unbalanced force.

Question. The following is the distance-time table of an object in motion: 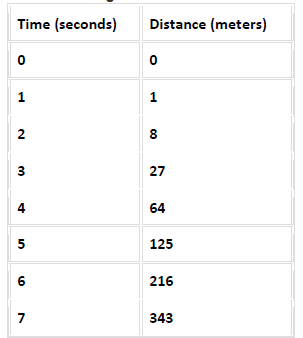 Question. Two persons manage to push a motorcar of mass 1200 kg at a uniform velocity along a level road. The same motorcar can be pushed by three persons to produce an acceleration of 0.2 m s-2. With what force does each person push the motorcar? (Assume that all persons push the motorcar with the same muscular effort)
Answer. Given, mass of the car (m) = 1200kg
When the third person starts pushing the car, the acceleration (a) is 0.2ms-2. Therefore, the force applied by the third person (F = ma) is given by:
F = 1200kg × 0.2 ms-2 = 240N

Question. A motorcar of mass 1200 kg is moving along a straight line with a uniform velocity of 90 km/h. Its velocity is slowed down to 18 km/h in 4 s by an unbalanced external force. Calculate the acceleration and change in momentum. Also calculate the magnitude of the force required.
Answer. Given, mass of the car (m) = 1200kg
Initial velocity (u) = 90 km/hour = 25 meters/sec
Terminal velocity (v) = 18 km/hour = 5 meters/sec
Time period (t) = 4 seconds

Question. An object of mass 100 kg is accelerated uniformly from a velocity of 5 ms–1 to 8 ms–1 in 6 s. Calculate the initial and final momentum of the object. Also, find the magnitude of the force exerted on the object.
Answer. Given, mass of the object (m) = 100kg
Initial velocity (u) = 5 m/s
Terminal velocity (v) = 8 m/s

1. A bullet fired from a gun is more dangerous than an air molecule hitting a person, though both bullet and air molecule are moving with same velocity. Explain.
2.Why are road accidents at high speeds very much worse than accidents at low speeds?.
3. What was the misbelief about the theory of motion before Newtonian motion theory?
Why was it overruled?
4. When force acting on a body has an equal and opposite reaction, then why should the body move at all?
5. What can you say about the speed of a moving object if no force is acting on to it.?
6. Is a marble rolling down an inclined plane moving with constant velocity? Explain.
7. Two forces of 5N &22N are acting in a body in the same direction what will be the resultant force& in which direction will it act?
If the two forces in the above example would have been acting in the opposite direction What would be the resultant force& in which direction will it act?
8.If we push the box with a small force, the box does not move, why?
9. What should be the force acting on an object moving with uniform velocity?
10. Give reasons:
(a) Carpet is beaten with a stick to clean it,
(b) Seat belts are provided in the cars to prevent accidents.
(c) Only the carom coin at the bottom of a pile is removed when a fast moving carom coin (or striker) hits it.