Q.1 Prince the manager of a business undertaking, is very lax with his fellow employees and subordinates. He does not given them parameters or rules for reporting to work and completion of assignments. Which principle of management is overlooked?
Ans. Principle of Authority and Responsibility.

Q.2 “Workers should be encourage to develop and carry out their plans for development. “Identify the principle of management formulated by Fayol.
Ans. Principle of initiative.

Q.3 “A manager should replace ‘I’ with ‘we’ in all his conversation with worker to faster team spirit.” Identify the principle of management emphasized here.
Ans. Espirit –De- Corps

Q.4 Priyanka, manager, experts his subordinates to adapt to the new environs and working condition without giving them time to settle down. Which principle of management is being overlooked?
Ans. Stability of tenure of personal.

Q.5 Which principle of Taylor advocates scientific enquiry as opposed to hit and trail?
Ans. Science is not Rule of Thumb.

Q.7 Why is Taylor most remembered?
Ans. For his time and motion studies. 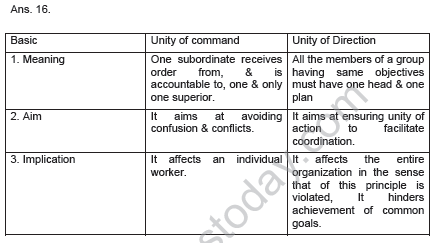 5-6 MARKS QUESTION
1. Explain the principles of scientific management given by Taylor.
2. Explain any functional foremanship techniques of Scientific Management with diagram.
3. Explain the importance of managerial principles.
4. Are the principles of management given by Henry Fayol and F.W. Taylor are complimentary or supplementary to each other. Justify your answer.
Ans.1 Scientific management means knowing exactly what you want men to do and seeing that they do it in the best and cheapest way.
Principles of Scientific Management
(i) Science, not rule of thumb :— Taylor believes that there was only one best method to maximize efficiency. This method can be developed through study and analysis. The method so developed should substitute ‘Rule of Thumb’ throughout the organization. Scientific method involves scientific observations and analysis of each task and determination of standard of work.This will result in tremendous saving of human energy as will as wastage of time and materials.
(ii) Harmony, not discord :— Taylor emphasized that there should be complete harmony between the management and workers. Both should realize that each one is important to achive, this Taylor advocate a complete ‘Mental Revolution’ on the part of both management and workers. It means that management and workers should transform their thinking. In such a situation each trade unions will not think of going on strike etc. Managers should adopt an enlightened attitude and share the gains of the company with workers.
Workers on their par should work hard with discipline and loyalty. Both should be part of the family.
(iii) Co-operation, not individualism :— There should be complete cooperation between the labour and management instead of individualism. Management should work almost side by side with the worker helping, encouraging and smoothing the way for them. This principle is extension of the principle ‘Harmony not Discord’. Competition should be replaced by co-operation. Both should realize that they need each other. For management should receive their suggestions of the employees. They should be rewarded if any of their suggestions results in substantial reduction in costs. They should be allowed to take part in management decisions. At the same time workers should resist from going on strike and making unreasonable demands on the management.
(iv) Development of each and every person to his/her greatest efficiency and prosperity :— Industrial efficiency depends to a large extent on the competencies of the employees. According to Taylor, to increase efficiency each person should be scientifically selected. The work assigned should suit her/his physical, mental & intellectual capability. They should be given the required training as well as to learn the ‘best method’ to do a Job.
Efficient employees would produce more and earn more. This will ensure that their greatest efficiency and prosperity for both the company and workers.
Ans.2 Techniques of Scientific Management
Functional foremanship :— It is an extension of the principle of division of work on specialization to the shop floor. Each worker will have to take order from eight foremen in the related process of function of production.
Basic Aim of Functional Foremanship :— To separate planning functions from executive (operative) functions. Under the factory manager there was a planning in change and a production incharge.
• Under planning incharge, four personnel, namely, instruction card clerk, route clerk, time clerk and cost clerk and disciplinarian worked. These four personnel would draft instructors for the workers specify the route of production prepare time and cost sheet and ensure discipline, respectively.
• Under production incharge four personnel who would work were speed boss, gang boss, repair boss and inspector. They were responsible for timely and accurate completion of job, keeping machines and tools etc., ready for operation by workers, ensure proper working condition of machines and tools and chick the quality of work.
• Foremen should have intelligence, education, tact, judgment, special knowledge, energy, honesty and good health all these qualities cannot always be found in a single foreman. So, Taylor purposed eight specialists.

Ans.4. Significance of Management Principles
Provide useful insights to manager : – Principle of managers provides useful insights to managerial behaviour and influence managerial practices. These principles will add to their knowledge ability and understanding of managerial situations and circumstances. Managers may apply inside principles to fulfill their task and responsibility. They enable the managers to learn from past mistakes and save time by solving recurring problems fast. So, management principles increase management efficiency.
Optimum Utilisation of Resources :— Management principles aim at optimum utilization of human and physical resources for the attainment of organizational goals. By optimum utilization, we learn that resources should be put to use in such a manner that they should give maximum benefit with minimum cost. e.g. — Science not rule of thumb suggest-every task should be done with minimum required efforts and energy.
Scientific Decisions  Management principles enable the managers to approach various problems systematically & scientifically & keep them in taking scientific decisions to meet changing conditions. Management decisions taken on the basis of principles are free from bias and prejudice because they emphasize logic rather than blind faith.
Meeting Changing Environment requirements :— Management principles train the managers to adopt the changes in technology in right direction and at right level in the organization. Thus, although the management principles are general guidelines, yet they are modified by the manager to meet changing requirements of the environment.
Fulfilling social Responsibility :— Management principles not only act as guidelines for achieving organisational objectives but this principle also guide the managers to perform social responsibility. E.g.— principles of “Fair Remuneration’ insists on adequate salary to employee.
5. The contribution of Henry Fayol and F.W. Taylor to the field of management is explained in following table. 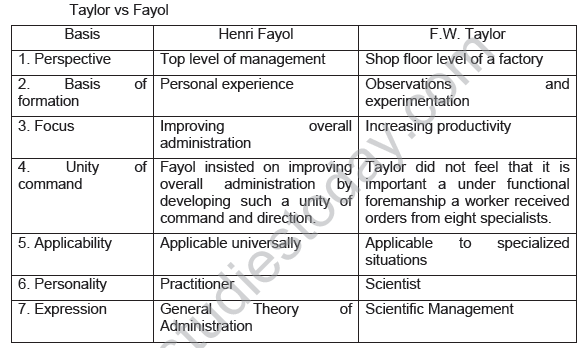 Download Worksheets for Class 12 Business Studies made for all important topics and is available for free download in pdf, chapter wise assignments or booklet...
More..