CBSE Class XII HOTs Biology - Evolution questions database with answers (Please refer to other links for answers to HOTs questions) for Class 12 of CBSE exams for CBSE Students. Based on CBSE and NCERT guidelines. The students should practice these Question Papers to gain perfection which will help him to get more marks in CBSE examination. Please refer to more CBSE Class 12 question papers in other links.

Q.1) Study the figures (a) and (b) given below and answer the question given after the graph 3

i) Under the influence of which type of natural selection would graph (a) become like graph (b) 3
ii) What could be the likely reasons of new variations arising in the population?
iii) Who suggested natural selection as a mechanism of evolution?
Ans1) i) Average single - stabilizing selection
ii) Directional selection
iii) Darwin
Q.2) In England, after industrialization it was observed that white winged moth did not survive. 3
i) What you think the cause may be?
ii) What was the change and why it has happened?
iii) Which organism is known as natural indicator to air pollution?
Ans 2) i)White winged moths disappeared as they were eaten up by predator.
ii) This change was due to darkening of trees bark on which moth lived due to industrial pollution. Moths could not camouflage and are thus eaten up by predators.
iii) Lichens
Q.3) Study the following pairs of organs and identify them as homologous or analogous organs: 3
i) Thorns of Bougainvillea and cucurbit tendrils.
ii) Fore legs of horse and arms of man
iii) Wings of bat and butterfly
iv) Flipper of whale and fins of fish
v) Trunk of elephant and human nose.
Ans 3) i) Homologous
ii) Homologous
iii) Analogous
iv) Analagous
v) Homologous
Q.4) Complete both columns representing evolutionary history of vertebrates, through geological periods. 3 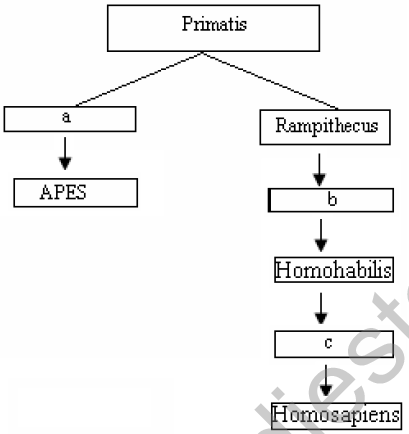 Ans5) a) Dryopithecus  b)  Australopithecus   c) Home erectus
Q.6) Trace the evolutionary stages of any one bird or animal using various resources such as internet, library etc. 2
Ans6)Evolution of beaks of finches that Darwin found.Refer NCERT text book page
Q.7) Sometimes the change in allele frequency is so different in the new sample of population that they become a different species. State the factors known to affect Hardy Weinberg equilibrium. 2
Ans7) Five factors are known to affect Hardy- Weinberg's equilibrium
a) Gene migration/ gene flow
b) Genetic drift
c) Mutation
d) Genetic Recombination
Q.8). Can we call the human evolution as an example of adaptive radiation? 1
Ans.8) Hints- page-no133.NCERT Textbook for class XII