CARBON-AN INTRODUCTION
Carbon is the most important and widely distributed element on the earth. It is present in the bodies of all living organisms, plant and animals and also in several non-living things (e.g. limestone, marble, chalk, etc.). It is present in air as CO2. It forms the largest number of compounds and above 85% of known compounds contain carbon. Compounds of carbon are studied as a separate branch of chemistry known as Organic Chemistry. Its name is derived from the Latin word "Carbo" meaning coal. Carbon constitutes about 0.02 percent of the earth's crust.

CATENATION
Carbon has a unique property that it can join with other carbon atoms to form carbon-carbonbonds This can result in the formation of compounds with long chains. This property is called catenation.

HYDROCARBONS
This most important combination of carbon is with hydrogen to form a set of compounds known as Hydrocarbons. 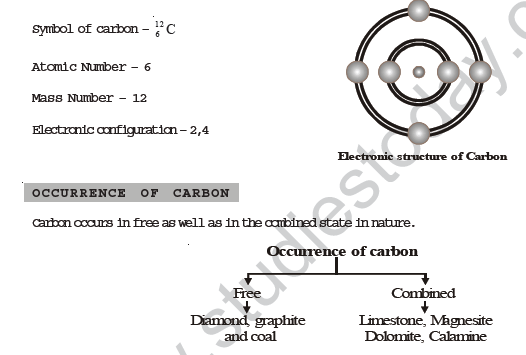 Carbon is the essential constituent of food for all living beings. This carbon comes essentially from the non-living world, mainly in the form of carbon dioxide converted into starch during photosynthesis and to a small extent, from carbonates and bicarbonates dissolved in water. For life to contiune, this carbon has to go back to the nonliving world. This happens mainly through respiration and combustion, and to a smaller extent by the decay of
dead remains of living matter. Thus, there is constant transfer of carbon between living and non-living matter. This continuous cycling of carbon between the living and the non-living world is called the carbon cycle, as shown in fig. 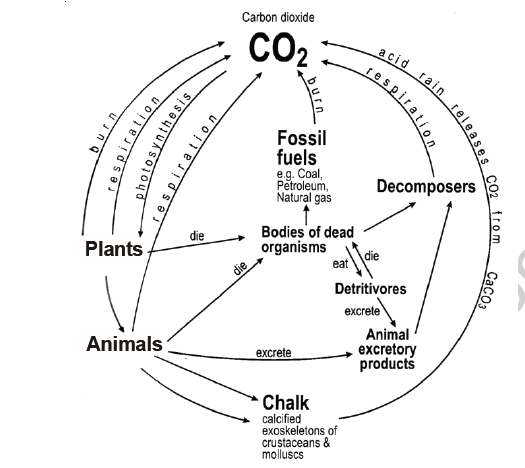 The phenomenon of existance of an element in two or more different forms in the same physical state is known as allotropy. 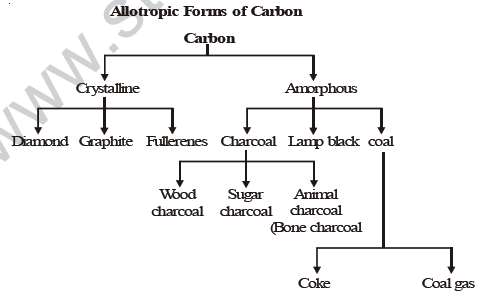