Class 12 Biology students should refer to the following concepts and notes for Reproduction In Organisms Study Guide in standard 12. These exam notes for Grade 12 Biology will be very useful for upcoming class tests and examinations and help you to score good marks

CYST :- Hard covering around the organism protecting from anti environment.

DIOECIOUS :- It is the condition in which either male or female reproductive organs are found in the same body of an organism.

EMBRYOGENESIS :- It is the process of development of embryo from the zygote..

FERTILIZATION :- The union of two opposite types of gametes, spermatozoa and ova to produce single diploid zygote.

FISSION :- Division of nucleus with cytoplasm.

FRAGMENTATION :- Division of breaking into distinct pieces each of which can produce an offspring.

GEMMULE :- The parent individual releases a specialized mass of cells enclosed in a common opaque envelope called the gemmule.

HERMAPHRODITE :- Organisms which have both male and female reproductive organs in the same individual.

LIFE SPAN :-The period from birth to the natural birth of an organism.

MEIOCYTE ;- The cell which undergoes meiosis is called a meiocyte .

MONOECIOUS :- It is the condition in which male and female reproductive organs are found in the same body of an organism.

REPRODUCTION :-Biological process in which an organism gives rise to young ones of its own kind.

SYNGAMY :- Syngamy refers to the fusion of two (male and female) gametes.

VEGETATIVE PROPAGATION :-It is the process of formation or regeneration of new plants from a portion of a vegetative part of the plant . 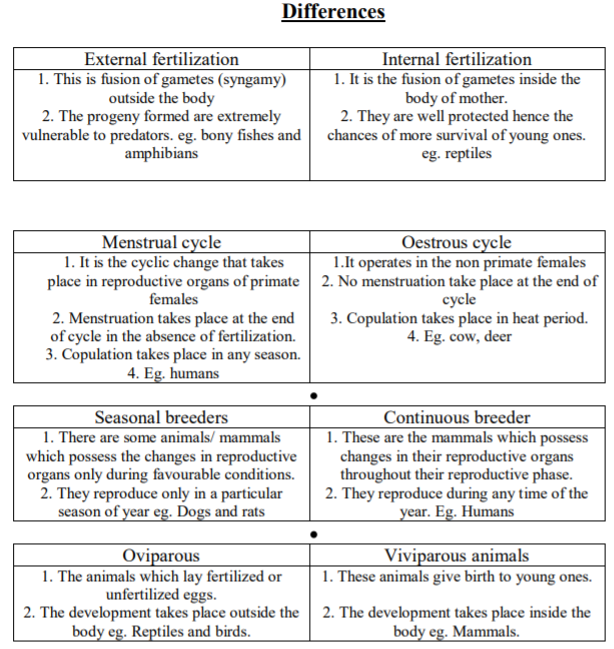 2. Name the structure which gets transformed into seeds at maturity.

3. Show diagrammatically only reproduction in yeast.

4. Name two animals having external fertilization. Why are more gametes produced by such animals?

LEVEL 3
1. What are the three major phases in the life cycle of organism? Define each phase
2. Discuss the similarities in pattern of sexual reproduction.
3. Name the kind of reproduction in bees by which drones are produced?
4. If the diploid number of chromosomes in an angiosperm plant is 28, what number would you expect in the endosperm and embryo of that plant?
5. Give the scientific terms for the following
a. Morphologically and genetically similar individual derived through asexual reproduction.
b. Cyclical changes shown by seasonal breeders.
6. What is the site of origin of new plantlets in the followings ?
a) Potato tuber,
b) rhizome of ginger,
c) leaves of bryophyllum,
d) stem cutting of sugar cane

7. Label S & P shown in the Figure and state one function each.

8.Arrange the following events in proper sequence:-
(i) (a) Embryogenesis (b) fertilization (c) Gametogenesis (d) Zygote formation
(ii) Mention two processes taking place in embryogenesis?
(iii) What will happen if meiosis does not take place during gametogenesis?

SELF EVALUATION ASSIGNMENT
1. Single celled organisms are considered immortal. Justify the statement taking the example of amoeba.
2. Which ability of plants like banana and bryophyllum is exploited by gardeners & farmers for theit commercial propagation.
3. All papaya and date palm plants produce flowers yet only few papaya and datepalm are seen to produce fruits. Suggest the possible reason for the rest not producing then.
4. in nature for both plants and animals hormones are responsible for transition between the three phases of their life span. Which three phases are being refer to here. What regulates the reproduction process and the associated behavioral expression in them?
5. Name the process of development of embryo from zygote. What are the two changes which the zygote undergoes during this process.
6. i)Name a group of plants that has haploid body
ii)what are the specialized cells which undergo meiosis in the diploid organisms.
7. (i) In bisexual flowers why is transfer of pollen grains easier than in the unisexual flowers?
(ii) Name the specialized event in unisexual flowers which helps in transfer of pollen.
(iii)How are the non-motile male gametes carried to the female gamete in seed plants?
8. Why Dogs and cats have oestrus cycle but human beings have menstrual cycle, through all are mammals? Why some mammals are called seasonal breeders?
9. Arrange the following events in proper sequence:-
(i) (a) Embryogenesis (b) fertilization (c) Gametogenesis (d) Zygote formation
(ii) Mention two processes taking place in embryogenesis?
(iii) What will happen if meiosis does not take place during gametogenesis?