Class 12 Biology students should refer to the following concepts and notes for Molecular Basis Of Inheritance in standard 12. These exam notes for Grade 12 Biology will be very useful for upcoming class tests and examinations and help you to score good marks

•DNA is a long polymer of nucleotides.

• A nucleotide has three parts – deoxyribose sugar, nitrogenous base and phosphate group.

• The molecule consists of large number of nucleotides joined together between the sugars and the phosphates by 3’-5’ phosphodiester bonds.

• The sugar-phosphate linked structure forms the backbone of the molecule

• The double strand molecule has alternate major groove and minor groove held by proteins called histones (in the case of eukaryotes).

• The biochemical work of Erwin Chargaff reveals that A+T/C+G= 1 and so A+G = T+C. Therefore, purines are always equal to pyrimidines (1:1). We must keep In mind that A+T= C+G.

• The nucleoplasm of the nucleus (Eukaryotes) has the mesh of chromatin. The chromatin fibre appears to a long string like structure having beads. The beads represents nucleosomes.

• Interestingly, it appears like a rugby ball when viewed the three dimensional shape.

• Nucleosome cores consist of an octamer of two molecules each of 4 histones namely H2A. H2B, H3, and H4.A fifth kind histone(H1) is located on the linker DNA between the nucleosome particles. The core is wrapped by superhelical strand of DNA having 165bp in two turns.

• Histones has rich of basic amino acids lysines and arginines , it is positively charged and you are aware that DNA is negatively charged particle.

• DNA is revealed as purple colour by the feulgen stain. It shows light regions (Euchromatin) and dark regions (heterochromatin). Remember, euchromatin is the regions of active DNA.

IN SEARCH OF GENETIC MATERIAL
TRANSFORMING PRINCIPLE
• Fredrick Griffith proposed this principle of Transformation by conducting the experiment on mice by injecting two strains namely R (rough) and S(smooth having capsule made of polysaccharide) . R strain is non-virulent and S is virulent.

IDENTIFICATION OF THE TRANSFORMING PRINCIPLE 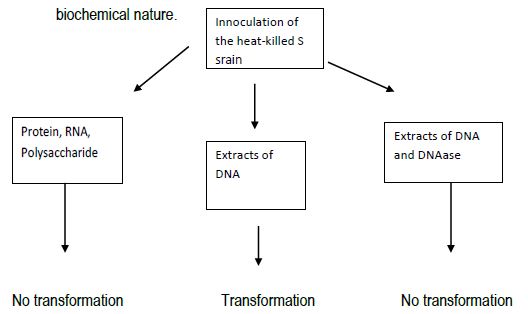 • It was tested by Oswald Avery, Colin Mcleod and Maclyn McCarty to determine the biochemical nature.

• It is concluded that the transforming principle is DNA

• They did the experiment by using phage having radioactive labelled S35 and other set of the phage having P32.

The flow chart is shown WITH STEPS INVOLVED 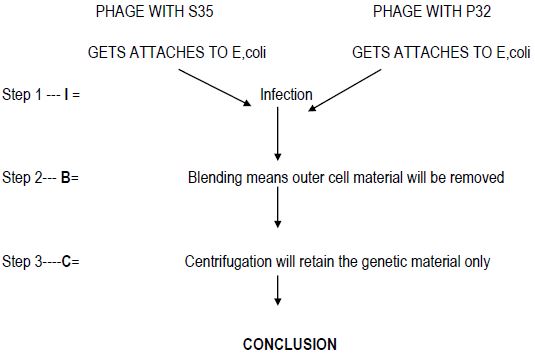 • It is semi-conservative in nature ie., in each DNA molecule, one strand is old and the other newly formed strand.

EXPERIMENTAL PROOF
• The semi-conservative type of replication was confirmed by Meselson and Stahl in 1958.

• E.coli was grown in N15 medium (heavy density non-radioactive isotope) for many generations. And centrifuged with CsCl2 density gradient and found as-

• Later, DNA with N15 were transferred to a N14 medium and allowed to replicate.(Replication duration is 20 min).

• The various steps involved are as follows:

- The process starts at a specific point called origin of replication(ori). The strand breaksfollowed by cleaving of hydrogen bonds.

- The two strands starts un winding by the enzyme helicase.

- It appears like `Y; shaped and it refers as replication fork.

The DNA polymerases which is responsible for synthesizing new DNA to the original strand (template strand) cannot function without the 3’OH group. Therefore, it is provided by short segment of RNA (primer) catalysed by the RNA polymerase. - The synthesis of the new DNA takes place in the 5’ 3’. The two template strands show 3’ 5’ and the other one has 5’ 3’ polarity. The replication begins at .3’ 5’ template first and the new DNA strand is called leading strand. In the opposite strand, it progresses from back towards the previously transcribed segment. This is the lagging strand.

- The lagging strand consists of small fragments called Okazaki fragments. These are connected by the enzyme ligase. 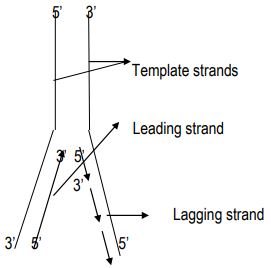 • Having the presence of the 2’OH group in the ribose sugar makes it highly unstable, reactive and so it shows catalytic role.

• mRNA- Messenger RNA is transcribed from DNA by the RNA polymerase II (Eukaryotes) and by single large holoenzyme (prokaryotes). mRNA carries the information of the DNA in the form of triplet bases called codons to the ribosome for protein synthesis. . It has a start codon as AUG (it is an amino acid –methionine) and ends with any stop codon (UGA, UAG, UAA). It is unstable and comprises less than 5% of the total RNA.

• tRNA- transfer RNA- It appears like a clover leaf or hair-pin pattern. It is the smallest among the RNA and comprises 10-20% of the total RNA. It carries amino acids to the mRNA during the protein synthesis. It may be less than 61 amino acids because tRNA shows wobble hypothesis. ( According to Crick, the third base of the codon wobbles with the first base of the anti-codon of the tRNA.). RNA polymerase III is needed for the synthesis of tRNA.(eukaryotes)

• rRNA – ribosomal RNA- it comprise 80 % of the total RNA. It is found in the ribosome and provides proper binding site for the mRNA of the ribosome. It is produced by the RNA polymerase I .(eukaryotes).

• The process of synthesis of mRNA from the DNA by the help of DNA dependent RNA polymerase.Let’s see the process in prokaryotes and in eukaryotes 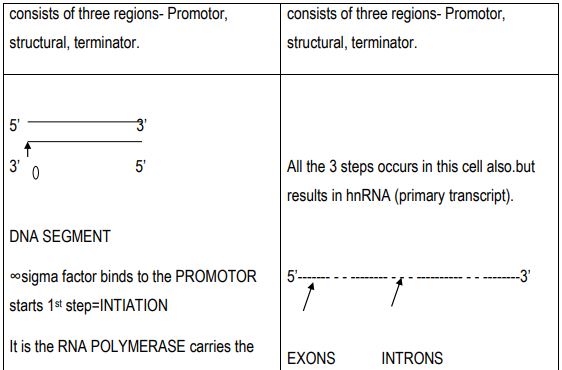 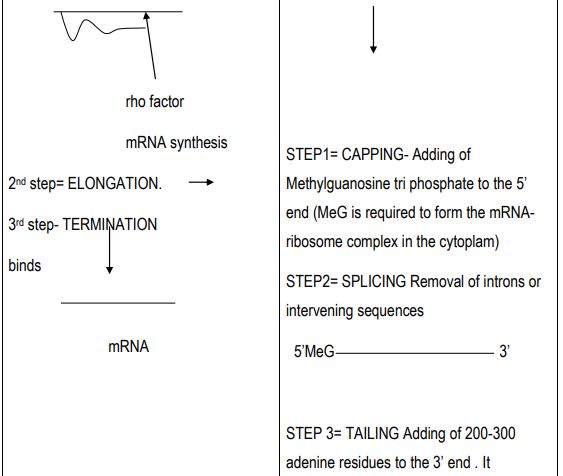 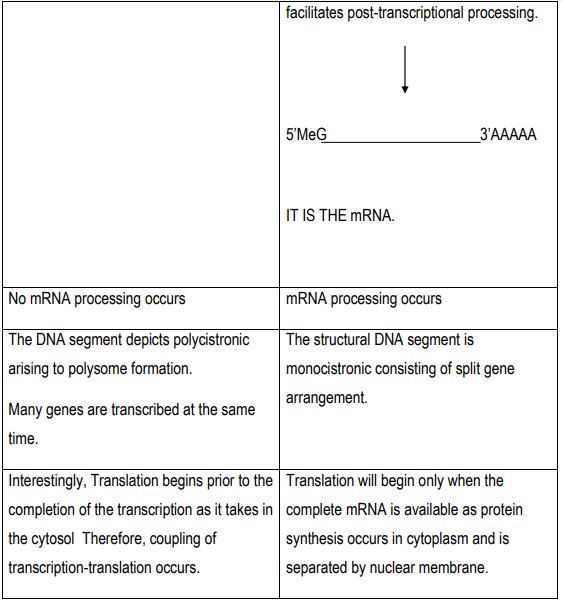 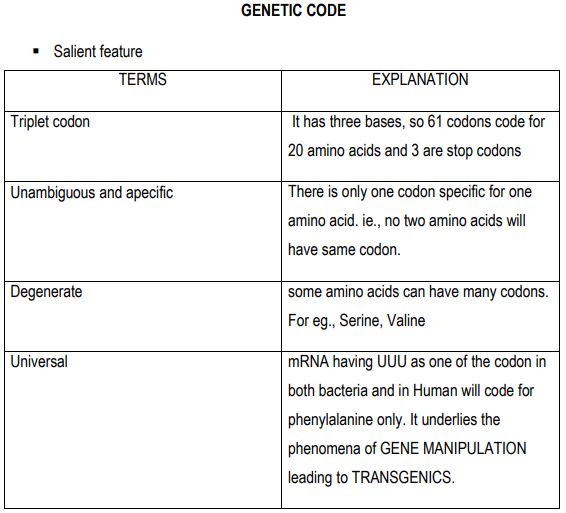 The story of protein synthesis has come to the climax stage, till now it can be show as

DNA - Has the language of nucleotides
↓

• CHARGING OF tRNA (aminoacylation of tRNA)

It involves the transfer of activated amino acid to tRNA 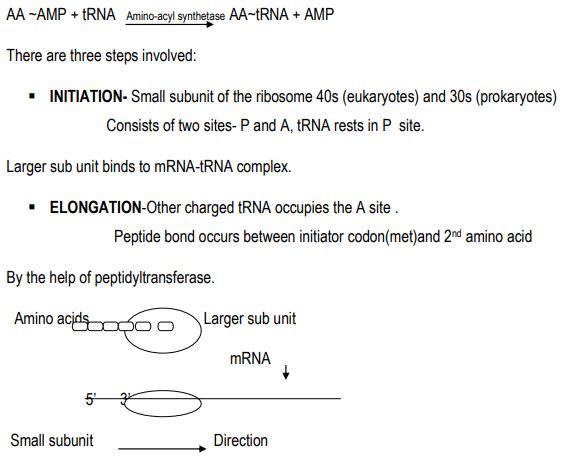 • TERMINATION- It stops at the site of stop codons as no tRNA arrives.
Complete polypeptide is released by the release factor. 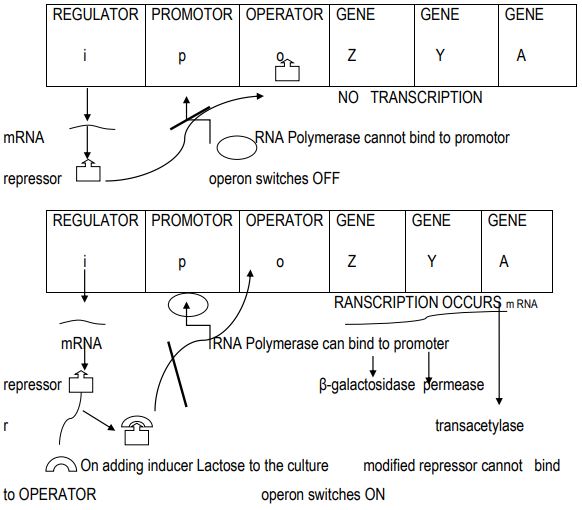 HUMAN GENOME PROJECT (HGP)
• It is the entire sequencing of the Human Genome . 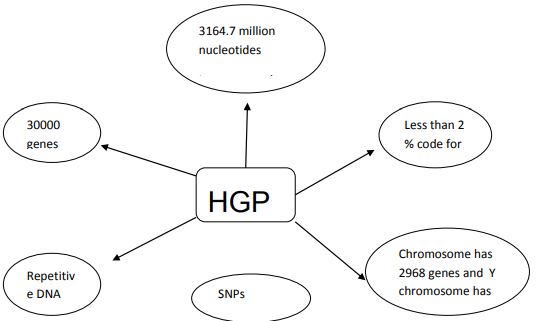 DNA FINGERPRINTING
It was developed by Alec Jeffres.
It is based on the principle of DNA polymorphism consisting of repetitive DNA including satellite DNA. It is two types STR and VNTR
VNTR (mini satellites ) is significant in this method.