Science
Download PDF
Read and download free pdf of CBSE Class 10 Physics Electricity Assignment Set C. Get printable school Assignments for Class 10 Physics. Standard 10 students should practise questions and answers given here for Physics in Grade 10 which will help them to strengthen their understanding of all important topics. Students should also download free pdf of Printable Worksheets for Class 10 Physics prepared as per the latest books and syllabus issued by NCERT, CBSE, KVS and do problems daily to score better marks in tests and examinations

(a) II and IV with IV more reliable of the two
(b) II and III with II more reliable of the two
(c) I and III with III more reliable of the two
(d) I and IV with IV more reliable of the two
Answer : C
Explanation: Option with 4 and 2 is wrong as they are with voltmeters. Option I is nearest. The best option may be I and III with III more accuracy of the two since L.C. is less.
Question : Three students X, Y and Z, while performing the experiment to study the dependence of current on the potential difference across a resistor, connect the ammeter (A), the battery (B), the key (K) and the resistor (R), in series, in the following three different orders.
X → B, K, R, A, B
Y → B, A, K,R,B
Z → B, R, K, A, B
Who has connected them in the correct order ?
(a) Z
(b) X
(c) X, Y and Z
(d) Y
Answer : C
Explanation: The current in the series does not depend upon order in which these instruments are connected. Where they are connected does not matter.
They should be in series for the flow to be observed.
Question : Which of the following fuse should be used for an electric iron of 1 kW when operated at 220 V?
(a) 1 A
(b) 3 A
(c) 7 A
(d) 5 A
Answer : A
Question. A cylindrical conductor of length l and uniform area of cross section A has resistance R.
Another conductor of length 2l and resistance R of the same material has area of cross-section
(a) A/2
(b) 3A/2
(c) 2A
(d) 3A

Question. If current through a resistance is increased by 100%, simultaneously reducing resistance value to 25%, the new power dissipated will be

Question. A multimeter is used to measure
(a) current only
(b) resistance only
(c) voltage only
(d) current, resistance and voltage.

Question. The proper representation of series combination of cells obtaining maximum potential is

Question. The V-I graph of resistor is shown in figure. If the resistance is determined at points A, B and C, then it is found that

Question. In the following circuits, heat produced in the resistor or combination of resistors connected to a 12 V battery will be

Question. The given figure shows the I-V curve (i) for a nichrome wire of given length and cross-section. Which of the following will yield the curve (ii)?

Question. In a metallic conductor, electric current thought to be due to the movement of
(a) ions
(b) amperes
(c) electrons
(d) protons

Question : Name the physical quantity whose unit is J/C.
Answer : Electric potential. It is represented by V.
Question : Why closed path is required for the flow of current?
Answer : A closed path is required for the flow of current so that charges can move in a particular direction in a given circuit. But if path is not closed means circuit is open, then there is air between the gap, and we know that air is an insulator for flow of charges, so the current stop flowing in the circuit.
Question : What is resistance of dry air?
Answer :  The resistance of dry air is infinity.
Question :`Draw a circuit diagram using a battery of two cells, two resistors of 3 each connected in series, a plug key and a rheostat.
Answer :   When we connect rheostat, key, battery of two cells and two resistors of three ohm each then required circuit diagram will be:

Question : What is the current through each of the resistances in the following circuit ?

Answer :
Resistors 1Ω and 2 Ω are in parallel.

Question : Two metallic wires A and B are connected in series. Wire A has length l and radius r, while wire B has length 2l and radius 2r. Find the ratio of total resistance of series combination and the resistance of wire A, if both the wires are of the same material?
Answer : 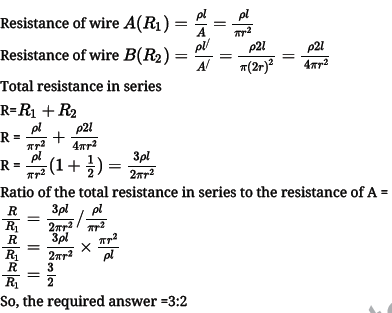 Question : Redraw the circuit putting an ammeter to measure the current through the resistors and voltmeter to measure the potential difference across 12 Ω resistor. what would be the reading in the ammeter and the voltmeter?
Answer :
Modified circuit is as shown. Since 5Ω, 8 Ω and 12 Ω are in series, therefore the total resistance in series.
Rs = R1 + R2 + R3 = 5 + 8 + 12 = 25Ω

Answer :  Let us first find the total resistance. Now resistance of 10 Ω and 15 Ω are in parallel.
If Rp is the effective resistance between B and C, then

Question : How do we express electric current?

Question : What is an electric circuit?

Question : What does a switch do?

Question : What is the SI unit of electric charge? How many electrons make one coulomb of charge?

Question : Which instrument is used to measure the current flowing in a circuit?How is it connected in the circuit and why?

Question : In which smaller units can we measure the small amount of current flowing in the circuit?

Question : How are the related to the SI unit of current?

Question : What makes the electric charge to flow?