Science
Download PDF
Read and download free pdf of CBSE Class 10 Physics Electricity Assignment Set B. Get printable school Assignments for Class 10 Physics. Standard 10 students should practise questions and answers given here for Physics in Grade 10 which will help them to strengthen their understanding of all important topics. Students should also download free pdf of Printable Worksheets for Class 10 Physics prepared as per the latest books and syllabus issued by NCERT, CBSE, KVS and do problems daily to score better marks in tests and examinations

Question : The given diagram shows the milliammeter reading connected in a circuit :

Find the combined resistance.
Answer :
Let the three resistors are R1,R2 and R3. Here R1,R2  are parallel to each other and R3 is in series with them then equivalent resistance can be obtained by the given formula:

Answer :  We know that resistance and cross-section area are inversly proportional to each other. So less area of cross section means more resistance . 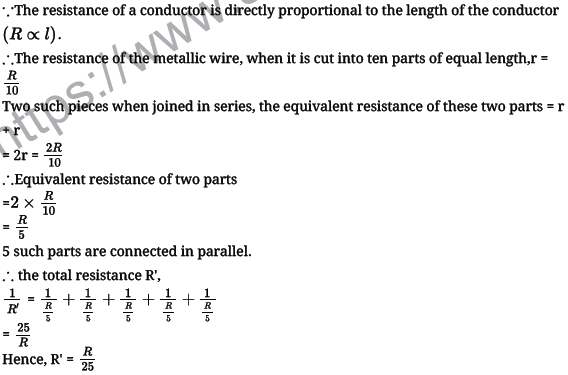 Question : Figure shows a 240 V A.C mains circuit to which a number of appliances are connected and switched on.

Question : Three equal resistors each equal to r and connected as shown in Fig. Calculate the equivalent resistance.

Answer :
Reducing the actual circuit to an equivalent circuit i.e. we find that the there resistors, each equal to r, are just placed parallel to each.

Question : What is the SI unit of electric charge? How many electrons make one coulomb of charge?

Question : Which instrument is used to measure the current flowing in a circuit? How is it connected in the circuit and why?

Question : In which smaller units can we measure the small amount of current flowing in the circuit? How are they related to the SI unit of current?

Question : What makes the electric charge to flow?

Question : Define the electric potential difference between two points in an electric circuit carrying some current.

Question : Which instrument is used to measure the electric potential difference between two points in a circuit? How is it connected in the circuit and why?

Question : State the law relating the potential difference across a conductor and the current through it?